The village of Stow was once a place of Sanctuary, centred on the ancient well and chapel of Saint Mary that, according to legend, was founded by King Arthur himself.    By the mid-seventeenth century, however, this Sanctuary was a thing of the past.

The 1600s can be seen as a century of trauma in the history of Scotland.  The ancient royal house of Stewart, ruling the land since 1371, had become absentee Heads of State, when King James VI inherited the throne of England after Elizabeth Tudor’s death and toddled off to his new palaces in London as quickly as he could.  Promising to come back regularly – he came back once – it soon became evident that Scotland’s ancient crown would not be worn much any more.  James’ son, Charles – born in Dunfermline, Fife – would inherit the crowns of Scotland and England and Ireland from his father in addition to an unshakeable belief in his divine right to rule, answerable only to God and not his Parliaments.

With this political uncertainty in the background, climate was also to have a detrimental effect on the Scots.  Periods of bad weather had contributed to crop failures and lack of food and many of the people suffered from starvation.  In 1644 this was exacerbated by the arrival of the Black Death, or Plague, which was to wreak havoc on the population for over four years.

Charles I’s reign had, for a variety of reasons, sparked civil wars in each of his three kingdoms and, in 1649, he would lose his head like his granny, Mary.

To many ordinary folk, it would have appeared that the End Times were upon them.

Looking for salvation or for causes of this terrible era with a seemingly angry God, it’s unsurprising that ordinary folk began to look close to home for something or someone to blame.  A new Scottish witch hunt would begin.  Again. There had been previous witch hunts and hysteria, notably only twenty years before, but the 1649 outbreak would be ferocious.  Belief in witches was centred on the belief that witches caused harm to people, their crops or animals.  Catastrophic weather, illness and famine, or the loss of invaluable cows or crops, could easily be seen through the prism of suspicion and intolerance.  That witches could cause you harm was widely believed in Scotland, by rich and poor alike. 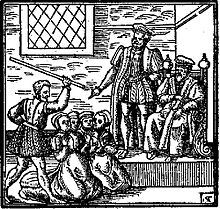 James VI, before his relocation south, would take a fanatical interest in witchcraft, even writing a book in 1597 – Daemonologie – and apparently interrogating alleged witches himself in the Canongate adjacent to his Palace of Holyroodhouse. His interest would wain in England, where many of the Scots’ beliefs were mocked as the superstitions of the parochial bumpkins.  To many Scots, though, witches were a real and terrifying danger and would remain so, some forty years after the King’s book was published.

Witchcraft had been illegal since the passing of the Witchcraft Act of 1563, passed by the Parliament of Scotland in the reign of Mary.  This made it illegal to practice witchcraft or consult witches – on pain of death.   A new law would pass, reiterating the main thrust of this Act, in 1649.

With God and the Law on their side, the fearful and Godly alike, would look to within their own communities for someone to blame…

Middle-aged increasingly pear-shaped man in Scotland, exploring the mysteries and histories of the Borderlands in a happy amateur bubble. Scottish Ethnology and History graduate. Bit witchy. I like trees. And cats. One part of the Tales from Wyrd Scotland podcast. View all posts by borderlandscotland