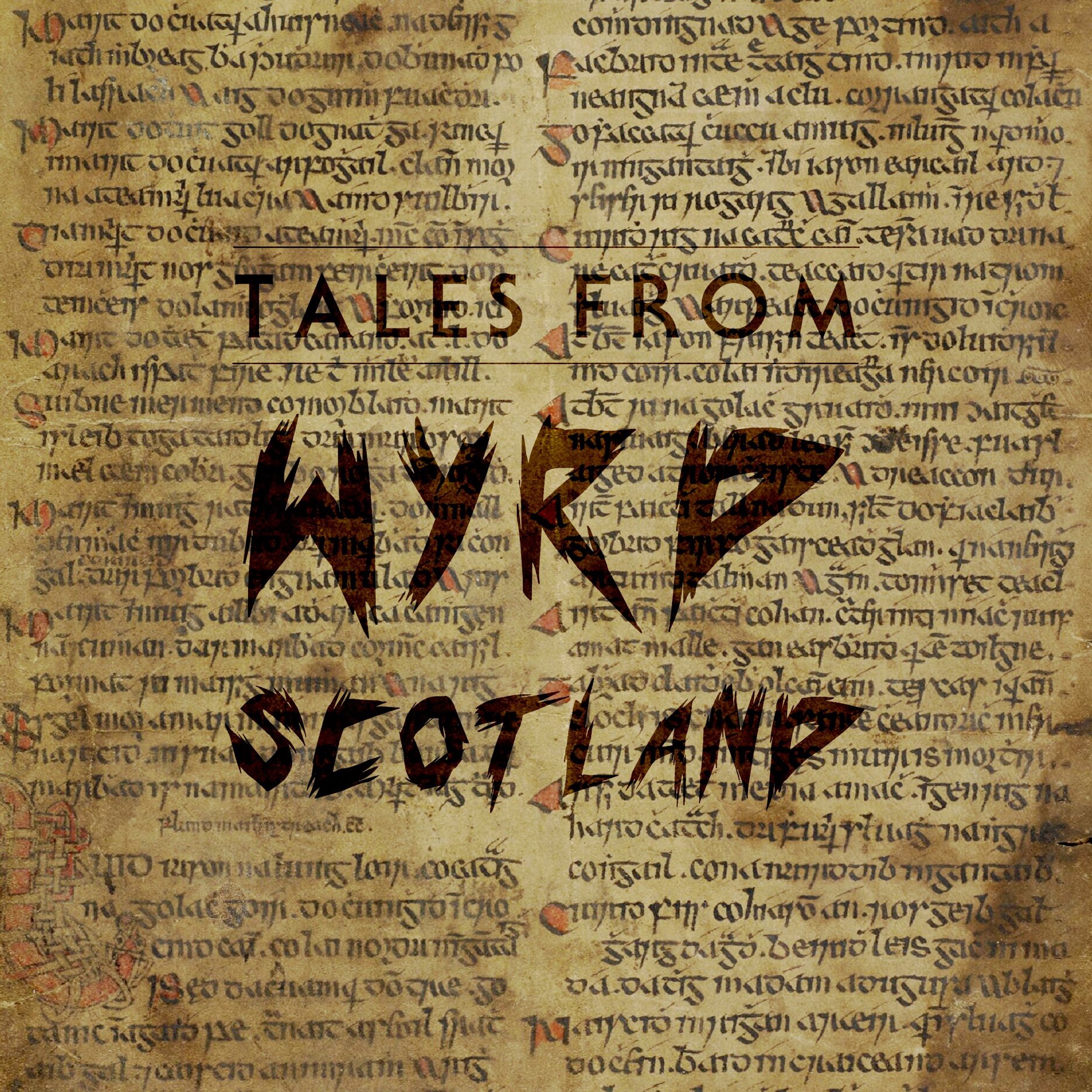 If you’re looking for a spookyish podcast to wile away an hour or so, may I recommend our very own Tales from Wyrd Scotland to you?

The latest episode is a bumper hour-long dander through the first half of a supernatural alphabet of Scottish wyrdness.  Narrated by me –  featuring breathily wyrd intonation – and the electronical genius of Nick Cole-Hamilton and You Better Run Media, it’s the prefect accompaniment to plotting a trip around our strange little country or merely getting the ironing or hoovering done!

So, curl up in your favourite dark corner and join me on a journey through some of Scotland’s oddest places and weirdest moments in history, from Auldearn to Men (Green)…

Available here or where other devilishly good podcasts can be found…

The village of Stow was once a place of Sanctuary, centred on the ancient well and chapel of Saint Mary that, according to legend, was founded by King Arthur himself.    By the mid-seventeenth century, however, this Sanctuary was a thing of the past.

The 1600s can be seen as a century of trauma in the history of Scotland.  The ancient royal house of Stewart, ruling the land since 1371, had become absentee Heads of State, when King James VI inherited the throne of England after Elizabeth Tudor’s death and toddled off to his new palaces in London as quickly as he could.  Promising to come back regularly – he came back once – it soon became evident that Scotland’s ancient crown would not be worn much any more.  James’ son, Charles – born in Dunfermline, Fife – would inherit the crowns of Scotland and England and Ireland from his father in addition to an unshakeable belief in his divine right to rule, answerable only to God and not his Parliaments.

With this political uncertainty in the background, climate was also to have a detrimental effect on the Scots.  Periods of bad weather had contributed to crop failures and lack of food and many of the people suffered from starvation.  In 1644 this was exacerbated by the arrival of the Black Death, or Plague, which was to wreak havoc on the population for over four years.

Charles I’s reign had, for a variety of reasons, sparked civil wars in each of his three kingdoms and, in 1649, he would lose his head like his granny, Mary.

To many ordinary folk, it would have appeared that the End Times were upon them.

Looking for salvation or for causes of this terrible era with a seemingly angry God, it’s unsurprising that ordinary folk began to look close to home for something or someone to blame.  A new Scottish witch hunt would begin.  Again. There had been previous witch hunts and hysteria, notably only twenty years before, but the 1649 outbreak would be ferocious.  Belief in witches was centred on the belief that witches caused harm to people, their crops or animals.  Catastrophic weather, illness and famine, or the loss of invaluable cows or crops, could easily be seen through the prism of suspicion and intolerance.  That witches could cause you harm was widely believed in Scotland, by rich and poor alike.

James VI, before his relocation south, would take a fanatical interest in witchcraft, even writing a book in 1597 – Daemonologie – and apparently interrogating alleged witches himself in the Canongate adjacent to his Palace of Holyroodhouse. His interest would wain in England, where many of the Scots’ beliefs were mocked as the superstitions of the parochial bumpkins.  To many Scots, though, witches were a real and terrifying danger and would remain so, some forty years after the King’s book was published.

Witchcraft had been illegal since the passing of the Witchcraft Act of 1563, passed by the Parliament of Scotland in the reign of Mary.  This made it illegal to practice witchcraft or consult witches – on pain of death.   A new law would pass, reiterating the main thrust of this Act, in 1649.

With God and the Law on their side, the fearful and Godly alike, would look to within their own communities for someone to blame…

I love October.  I love the light that brings the colour of the autumn leaves into sharp focus and the darkness that begins earlier each evening and ends later each morning.  I think autumn is my favourite season and, every night, I feel genuine joy at the smell of woodsmoke rising from the houses in our village that greets me when I get off the train after commuting.

October, of course, is also the month of Hallowe’en, so what’s not to like?

Growing up in the 1970s, Hallowe’en was not the commercial, Americanised festival it is today.  There were no lines of spooky bunting, witchy goblets or decorations for sale.  There were gaudy witch or Frankenstein monster masks for sale in Woolworths (a much missed American import!) and treacle scones for sale in Templeton’s.

There were monkey nuts and apples for dookin, but that’s all there was.  Or, all I can remember.  Or all that FineFare had to offer.  Remember FineFare?!  Perhaps, things became more exotic when the first ever Safeways opened, along the road, but I had more interesting things to do back then.

The highlight of Hallowe’en was the Herculean effort my Dad went to, carving out the almost impenetrable turnip lantern that would then sit, glowing on the sitting room window, the scent of burnt turnip wafting for days after the great event.  The blisters left on the hands of anyone who has attempted this is a real badge of honour.  To carve a tumshie was an old Scottish tradition, which, sadly, has been replaced by the great American pumpkin.  They’re easier to carve, after all.

Almost lost in some parts, but not quite totally, is the art of Guising.  Instead, the kids have adopted another US import, the more threatening Trick or Treat.  Perhaps not all that dissimilar after all, with dis-guised children going from house to house in a macabre version of first-footing, maybe all that’s different is the language.  The practice of Guising goes back many years in Scotland and Ireland, perhaps even to the 1500s.

It might sound like I have an anti-American thing going on, but that’s not the case.  It is, only, a small, nostalgic sadness that many customs and aspects of our culture and language have been replaced by cover-all expressions from elsewhere.  Even going the messages* for monkey nuts is a thing of the past.  And remind me to write about Glamour later.

(*Does anyone still say this instead of ‘going shopping’?)

It’s also true that, with the rise of an infinite number of Wiccan, other witch, pagan, nature and self-created beliefs and practices, many traditions or supposed traditions have appeared.  Or re-appeared, depending on your point of view.  In Edinburgh, in the 90s around the time that Buffy the Vampire Slayer was at peak power, there were around five Witchcraft shops in the city.  These have mostly gone, presumably moved on to other fads.  But some – perhaps the genuine ones – remain.  The invention, or reinvention, of Samhain is now marked by a free festival on a par with that of Beltane and Yule which are now celebrated in Edinburgh with music, procession and pagan heroes.

The popularity of The Boy Wizard currently in its ascendancy has seen at least four wizardy shops spring up recently – usually next door to the Christmas shops! And mostly painted in Gryffindor colours.  Cafes, tour companies and others, keen to capitalise on Edinburgh’s links to the Harry Potter saga, are enjoying their moment in the moonlight.  At least two cafes are held to be the ‘home’ of Harry Potter, where J.K.Rowling wrote.  And maybe they are.  The tourist dollar is important.

But, for me, the smell of the air, a walk in the woods, and the sight of smoke rising from a chimney, is the essence of Hallowe’en.  And one that can’t be spoiled by the power of money.  That, and a big bowl of lentil soup.

And the smell of singed turnip.